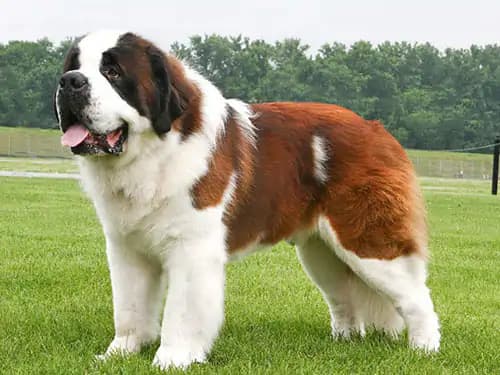 St. Bernard Training: St. Bernard; The Saint Bernard with its full name is a giant dog breed, also known as the Alpine Mastiff. Many people know him for his huge size and the barrel hung around his neck to find and save people lost in the snow of the Alps. As such, he appears as a popular character in many movies and even cartoons.

On an Alpine road connecting Switzerland to Italy is the Great Saint Bernard Pass Nursing Home. On this road, there are routes through which the Roman Empire passed. The Roman army also brought a large dog breed with them during these crossings. Over time, this large dog breed was hybridized with other breeds and evolved into the Saint Bernard breed.

Later, in the nursing home established here, the priests started to keep these dogs as guard dogs. It was observed that the dog found people lost in harsh winter conditions with its size, thick fur resistant to cold and its ability to smell. A St. Bernard named Barry had single-handedly saved 40 people. The dogs, which were suddenly popular with these features, were taken to England, Germany and America.

St. Bernard; It is a giant-sized, thick-haired and highly intelligent dog. Shoulder height is 70-90 cm in males and 65-80 cm in females. Their weight can vary between 50 and 91 kg. They have a large head and a short muzzle. They have dark eyes and medium-sized ears.

They have a strong jaw and a scissor bite. Their necks are long and thick, and their bodies are muscular and strong. It has a strong body and its tails are rarely up. It has a thick fur and its most known colors are brown and white. Apart from that, it can also be in different colors.

They are known as “gentle giants” in character. They form very strong bonds with their owners and families. They are very intelligent and loyal, making them an excellent family dog ​​with their obedience. They are much easier to train than many dog ​​breeds. They are very social dogs and are very good with people. He is especially good with children. It is an independent, quiet, friendly, gentle and intelligent dog.

As with many dogs, training should begin at an early age. Although they are intelligent dogs, they are mostly known for their slow thinking. For this reason, training should not be rushed and should be treated patiently and kindly. A completely closed environment is not for them.

Therefore, at least a house with a garden is mandatory for them. Its thick fur is suitable for cold conditions and can live outside. However, in hot weather, it can suffer a lot due to its thick fur. This dog needed regular exercise just like any other dog. That’s why daily walks are so important. In addition to its rapid growth characteristics, if regular exercise is not done, problems in bone development may occur. It is one of the breeds that should not be left alone.

While it is sufficient to brush their hair once a week, they should be brushed daily during the shedding season. Nails should be trimmed regularly. Otherwise it will cause the dog to suffer when walking or running. These dogs are prone to gaining excess weight.

Therefore, the food given should be chosen very carefully. It is more appropriate to give food in small quantities but with frequent meals. These dogs with an average lifespan of 8-10 years; They will be very healthy and happy with regular veterinary control, balanced diet and regular exercise.