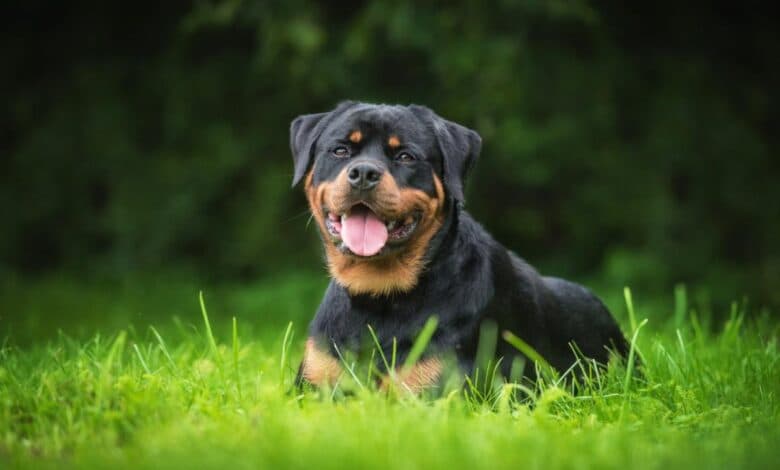 The Rottweiler is a guard and guard dog breed originating from Germany. It takes its name from the German town of Rottweil.

The Rottweiler dog breed is one of the oldest known dog breeds. Its historical ruler dates back to the Roman Empire. They have helped people in many ways with their herding and guarding features. It is even known as the race that led the herds of the Roman armies crossing the Alps and guarded the people in the convoy.

Although it is known that the Rottweiler is a dog breed that dates back to the Roman period, unfortunately it is not possible to say its origin clearly. Known for sure; While the Romans generally had most of the dogs fighting in the arenas, the Rottweiler was the shepherd of sheep kept as meat suppliers to the legions. According to the Roman historian Cornelius, when the Romans invaded today’s Germany in the 1st century, dogs had to keep watch over the sheep. These dogs were started to be bred in the castle established by the Romans in the city of Rottweil, located at the foot of the Alps, in 74. For 300 years, these Roman shepherd dogs were bred with local shepherd dogs. The similarity between today’s Rottweiler and Swiss Mountain Dog is just this. Due to the city’s strategic importance, Rottweil quickly became a major sheep selling centre. Therefore, a large number of shepherd dogs were needed. This dog was also called the ‘German Butcher’s Dog’ due to the fact that the butchers who kept sheep preferred the Rottweiler. Butchers trusted this breed so much that they are said to have tied bags of gold coins around the Rottweiler’s neck on the way to the bar. This is how their money was kept while their owners were having fun. Rottweiler, who acted as a watchman, was also preferred by peddlers over time. With the industrial era, the need for shepherds and guard dogs decreased. The Rottweiler breed, which was endangered in the 1900s, became popular again in the late 20th century. In 1910, Hamburg city police chief Hans Kruher used his Rottweiler dog to disperse drunken sailors. For the police, this breed was very important for its reliability and strength, and mating was carried out accordingly. In the same year, the German police declared the Rottweiler as the official police dog breed, as well as the German Shepherd and Doberman breeds.

The first Rottweiler to be officially recorded was Leo vonPlattenhardt. In 1908, his first son, Leo von Cannstadt, was born. Arcon von Torfwerk, who was born in 1918, is considered the ancestor of today’s Rottweiler breed. Many Rottweiler clubs were established during these years. However, on 14 August 1921 the ‘Allgemeiner Deutcher Rottweiler-Klub (ADRK) e.V.’ combined them all. However, the discussions about the shoulder height of the Rottweiler, which was in question before, were still going on. The Rottweiler’s shoulder height was set at 50 cm as a standard. So, it was slightly higher than a Bulldog. Those who did not like this small breed would argue that a guard dog should have a tall and large body. Small Rottweiler supporters thought that dogs with higher shoulder heights had less mobility and could not be used for other tasks. In the 70s, the Rottweiler’s external appearance began to gain importance. Athletic body structure, a big head and the power of the race came to the fore. In 1981 the standard was changed to 61 cm (maximum 68 cm). As a result, there are both small and large Rottweilers today.

As of April 6, 2000, the Rottweiler’s long tail, similar to the Labrador breed, instead of the cut short tail, began to be accepted by the breed standard. Cutting the tail and ears of dogs is prohibited in many countries, including Turkey.

It is known that their name comes from the town of “Rottweil”. For this reason, it is also known as the “rottweiler butcher’s dog”. The reason why they are known in this way is that their performance bar is high and their physical endurance is extremely good. In the 20th century, the Rottweiler breed was seen to be one of the most suitable breeds for the duties in the race selection tests conducted for use in the police force, and since 1910, Rottweilers have been used in the services needed in the police force after the training process.

The Rottweiler is generally seen as a wild and dangerous breed. But these affectionate dogs are actually calm, reliable and loyal. Because his body is so strong, he becomes dangerous when he acts wild. This is due to inadequate or incorrect training.

Rottweiler breeders; they aim for a dog that is very strong, has black fur with distinctive brown spots, has a strong appearance, but at the same time embodies its nobility in this image and is extremely suitable to be a friend, service and work dog.

The Rottweiler is a medium-large build, loyal, neither heavy nor light, long-legged nor low to the ground dog. Its well-proportioned, tight and strong build leads to great strength, agility and endurance.

The length of the body from the sternum (sternum-bone) to the ischiatic tuberosity should not exceed the height of the withers by more than 15%.

Skull: Medium length, broad between the ears. When viewed from the side, the forehead line is slightly curved. The occipital bone is imperceptibly well developed.

Stop: It is distinct and straight.

Mouth: The front of the face should appear neither elongated nor shortened relative to the skull. Straight nose bridge, tapering slightly from beginning to broad end.

Lips: Black, tightly closed, the corner of the mouth is not visible, the palate is as dark as possible.

Jaws and teeth: The upper and lower jaws are strong and broad. It has 42 strong teeth that close like scissors. The upper front teeth come tightly over the lower front teeth.

Cheeks: The curvature of the cheekbone is prominent.

Eyes: Medium-sized, almond-shaped and dark brown in color. Eyelids should be tightly closed.

Ears: Medium sized, drooping, triangular in shape. Having the ears on either side of the head makes the face appear enlarged.

Croup: (Trump-coccyx) Broad, medium length, slightly rounded. It is neither flat nor crooked.

Waist: The hump does not have a flank.

Tail: It looks like an extension of the back line in the right shape, can be wagged when relaxed.

Forequarters: As seen from the front, the forelimbs are straight and not too close together. The forearm, when viewed from the side, extends straight and upright. The inclination of the shoulder bone makes an angle of approximately 45 degrees when viewed horizontally.

Upper arm: Close to the body.

Buttermilk: It is slightly oily, strong and not upright.

The Rottweiler is a trotting dog. In motion the back is straight and relatively stable. His movements are harmonious, serious, full of energy and unlimited strides.

The skin on the head is tight and fits perfectly. Slight wrinkles may appear when the dog pays attention to something.

Feathers: The fur consists of upper fur and lower fur. The upper fur is of medium length, coarse, dense and straight. The lower fur should not be visible from the upper fur. The hair on the back of the feet is slightly longer.

Color: It has distinctive brown markings on the cheeks, muzzle, neck, chest and legs, and above the two eyes and below the beginning of the tail.

They are good-natured, generally docile and get along very well with children, are loyal, obedient, docile, and eager to work. His appearance is natural and simple, his behavior is self-confident, serious and fearless. He reacts to his surroundings with great agility.

In the past years and today, the Rottweiler breed has been injured by the negative reviews in the press. The topic of discussion was whether this breed was safe, even if it was in the right hands. Unfortunately, these negative reviews caused malicious people who had not heard the name of the Rottweiler breed before and did not want to own it, and they started to have this breed, which they did not sympathize with before. With the wrong attitudes and education of these people, the Rottweiler race began to be known as a race that many people fear. Although, this dog breed can scare even a highly experienced trainer or breeder with its strong appearance, strong jaw muscles, hard gaze and warrior appearance at first glance, with its developed muscles. The dog’s character and what it can do next, make it difficult to predict due to its flattened ear and cut tail. Therefore, it is an indisputable fact that there is a race that everyone approaches with suspicion.

The Rottweiler is a working dog and Rottweiler owners should remember this, it is not an accessory. While his ancestors were a shepherd dog (This feature has not been lost). has accepted.

People who want to have a Rottweiler breed should definitely evaluate the intelligence of the dog, and should definitely apply for obedience training to control the dog with activities that will enable the dog to use and develop its intelligence. In order for the dog not to accept himself as the leader in the family, training should be started at a young age and games that will make the dog’s attack instinct not be allowed. A Rottweiler must follow the absolute and absolute owner’s orders and show due obedience. The dog should be socialized very well and introduced to people and especially children, the dog should be allowed to establish positive dialogue with people, and great importance should be given to meeting the dog, especially in domestic life.

The Rottweiler is a dog that does not change its rules and does not compromise its character, so the rules that the dog must follow should be instilled in the dog with careful and sensitive training. If your dog; If it was bought from a well-known breeder that socializes and cares for dogs, what you need to do to have a loyal and good-natured Rottweiler has decreased, but from now on, whatever you give to the dog, the dog will reflect this behavior and respond to you and the environment.

The Rottweiler is an intelligent work dog and in family life, the dog’s energy needs to be discharged during the day with games and exercise. The dog cannot tolerate being behind closed doors. Family members should realize how important the dog’s training and discipline is, individuals should never compromise the rules set for the dog and should work together for the dog’s obedience.

The Rottweiler puppy must learn what to do, what not to do and where to go. An eight-week-old pup may growl and protect his food and toys from you. These behaviors should be prevented immediately and correct behaviors should be taught to the puppies. Too much exercise should be avoided until the pup’s sixth month, too much exercise can be dangerous for the pup’s delicately developing bone and muscle structure. Rottweilers, like any dog, want a territory of their own, so it’s a good idea to prepare a place with a large cage where they will feel comfortable and not be disturbed by the noises in the family while they sleep.