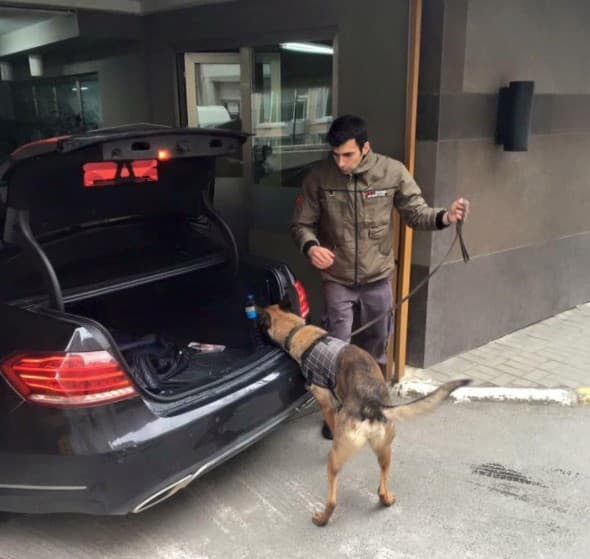 In the ever-changing and evolving world of security, being one step ahead of the enemy is extremely important. Considering the developing technology, the unpredictability of attack methods and the recent events, one of the most reliable security methods is K9 dogs. The use of K9 dogs in the security industry has become quite common. This situation shows that local governments and private sector companies are conscious about security. Probably, this situation emerges as a result of the terrorist incidents that we have witnessed frequently lately.

How Do K9 Security Dogs Contribute to Safety?

An internet study has revealed some points where dogs have an advantage over humans.

Smell Sensitivity
Under favorable conditions, a dog can smell a living creature from miles away. This is because dogs have 40 times larger olfactory bulbs than humans. Dogs have between 125 and 220 million scent-sensitive receptors, while this number is only around 5 million in humans.

In greyhounds, this number is around 300 million. What’s more, only 5% of human brain cells are involved in olfactory function, while 35% of a dog’s brain works on olfactory movements. It’s not just about proportions, the working principle of a dog’s nose is also different from that of humans. Breathing and olfactory activities do not occur together as in humans. Once air enters a dog’s nose, it travels into 2 separate compartments, one for breathing and one for smelling. This means that the air he breathes also does not prevent the dog from analyzing its smell. It is even thought that the breath he exhales helps new scents to enter. In this way, dogs can smell even when they are constantly breathing. A dog can also determine the direction of the air that harbors the scent, thanks to its wet nose. They can even distinguish odors of very low intensity. They have the ability to distinguish even odors that are 100 million times less intense than humans.

Hearing Sensitivity
Besides their wonderful sense of smell and sight, dogs can even detect sounds far above the frequency limit that humans can hear. The frequency range they can hear is between 40 hz and 60,000 hz. In addition, dogs have movable ears that allow them to pinpoint where the sound is coming from. Even if they can hear their owner’s voice at a distance of up to 2 kilometers, they can distinguish it from other sounds.

Superior Night Vision
Although dogs are colorblind, they can see quite well at night. They seldom make mistakes about something they see at night. Dogs’ ability to visually distinguish moving objects is also a great skill.
They Don’t Complain and Have No Bad Habits
Dogs do not make demands such as salary increase, retirement, night work, overtime and other benefits, except for food, vitamins and vaccinations. Like humans, they do not show weaknesses such as avoiding responsibilities, coming to work drunk, falling asleep on duty, pretending to be sick, and collaborating with malicious people.

K9 service providers must have a license. Like other security companies, it is important that K9 suppliers have received the necessary training and are certified by national and international authorities.
Dog Training is very important. K9 Security Dogs must be able to detect different bomb components, along with the main explosive and the different substances used in the detonator. Dogs must be bred to be able to detect not only low-intensity odors, but also true explosive odors with very high intensity. Experience has shown that while some dogs are good at locating small quantities of substances, they are unable to detect large quantities of substances or real explosives. It is very important to train dogs to detect different amounts of explosives as well as various and different components. It is also very important to stay up to date with the latest explosives. To stay undetected, terrorists use unconventional explosives such as picric acid, which is used to make TNT.

The competence of dogs should be tested regularly. Like humans, they need to undergo regular refresher training, or their abilities may be reduced.
Administrators should also have certificates issued by authorized institutions, showing that they have the ability and competence to provide K9 training.
The preventive, deterrent, operational and forensic functions of K9 Duty dogs are highly trusted and considered to have serious advantages over alternative methods.