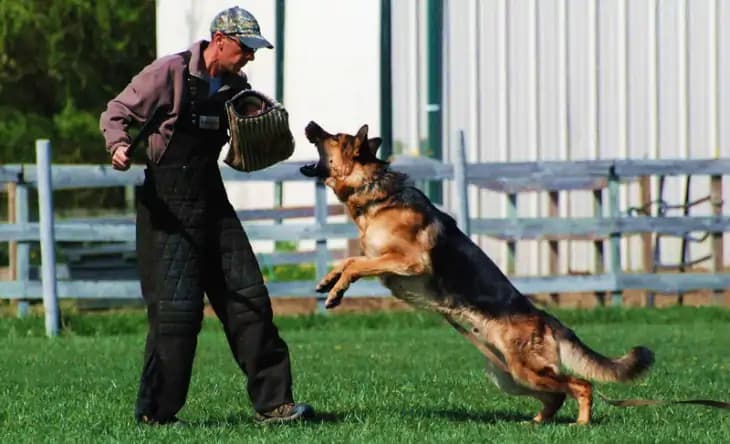 While dogs do not show ear-piercing behavior in their environment, in case of a stranger coming, they prick their ears against the sound and focus on the place where the stranger is. After the guard dogs are gradually trained in the best way, they should be trained in arrest, anger development, land search and tracking. Without professional guard dog training, no results can be obtained from training such as arrest and trace tracking.

Guard dogs bred for prisons recognize detainees and display aggressive behavior towards their clothing. Watchdog; As in here, training can be given even according to only one outfit. In training to show aggression towards strangers, it is very important to listen to the owner’s command. At this stage, the owner must be authoritative and use commands on site. A dog that has been brought up in this way does not show closeness to anyone other than the owner, and they do not even eat the food given by someone else.

Breeds That Can Be a Watch Dog

Shepherd dog known as German shepherd; It is a breed suitable for missions such as search and rescue, drug operations and watchdogs. Working with attention and devotion, the German Shepherd performs its task in the best way with its high focus capacity. The Kangal dog, which has survived from Central Asia to the present day, has been described as as strong as a lion. Kangal dogs that get along very well with children; It is among the most preferred dogs for protection and loyalty to its owner.

Doberman dogs, which have an imposing and strong appearance, are also among those preferred as guard dogs. Behind his frightening appearance; a dog that is loyal and obedient to its owner. Dogo dogs, which have an athletic body, also get along very well with children, although they have a tough appearance like Doberman. It is the type of dog that can be a watchdog as they need regular exercise every day.

Dogs; As a result of the right education and approach, it is man’s best friend. In dog training, it is important to first know what a dog may want. Love, attention, plenty of exercise, and an authoritative owner are all it takes. Half-hour walks every day; it causes the dog to throw off his energy, reduce his aggression and strengthen the bond with his owner. Especially in a crowded pet dog, it is necessary to make sure that the family members are approached in the same way.

The dog fed this consistency; It becomes a healthy, social and obedient dog. One of the most important points when keeping a dog is to choose a dog that suits your lifestyle. If the dog you feed is given trust and a strong leader, there will be no problem in obedience.

People who love dogs and want to have dogs should first choose a dog suitable for their lifestyle and then feed a dog. By doing research on this subject, you can feed the appropriate dog. In areas such as homes and factories, guard dogs are the most suitable dogs. The right training must be given at the right time in order for a guard dog to be loyal to its owner and to follow commands.