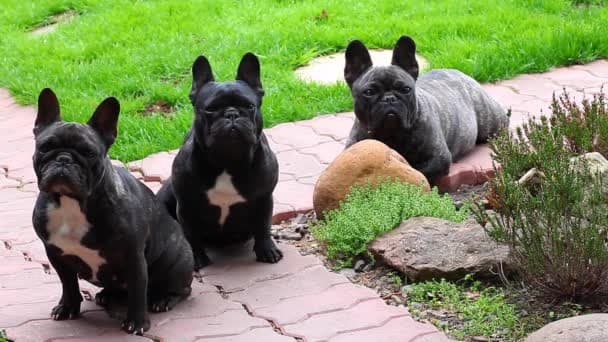 The French Bulldog dog is a petite-looking dog breed that was obtained as a result of different crosses in the 18th century. It was discovered in France. This dog breed, which was attracted and owned by the butchers in the first years of its discovery, has started to be recognized over the years and attracted attention due to its appearance. Interested French Bulldogs were adopted by wealthy people over time. These dogs, whose appearance is remarkable, are sensitive to climate and like temperate climates.

Physical Characteristics of the French Bulldog

French Bulldogs, a miniature dog, belong to the Bulldog breed. Contrary to appearance, this dog breed with short legs and tails has a strong bone structure. His nose is flat. It has a broad head. Their ears are round and erect. The lower jaw is longer than the upper jaw and extends to the upper jaw. They usually have dark eyes. Feather colors can be black, white, brown.

However, nowadays, it is possible to see a French Bulldog dog with blue and lilac hair color, although it is rare. They can live up to 16 years if well cared for. This dog breed, which has a very sensitive body, cannot live for a long time in very hot environments and dies by having a heart attack.

Their skin is very sensitive and they may experience discomfort such as eczema and scabies. Because their noses are flattened, they cannot breathe well and may experience snoring problems. They may drool, although not very often. This dog breed, which has short hair, is easy to care for. This dog breed, which requires special care due to its skin and coat structure, requires special attention. Special lotion should be applied to the tail and face folds. The hair care of these dogs, which shed in seasonal transitions, should be carried out with a rubber brush. It can reach weights up to 13 kg. They can reach up to 30 cm in length.

What is the French Bulldog’s Character Structure?

It is one of the most suitable dog breeds for maintenance in an apartment environment. These dogs, who love children and love to play with them, make good playmates. Under the wrinkled face lies a happy dog. They are good-natured, calm, sympathetic and intelligent animals. He is loyal and devoted. They have a very strong sense of smell. They do not remain silent against intruders and try to keep them away by barking. It is a dog breed that demands a lot of attention and likes to attract attention.

If it does not receive enough attention, it shows behavioral disorders. Being an emotional dog, the French Bulldog does not like to be alone. His short legs do not allow him to jump from heights and take long walks. Gets tired quickly on long walks. They can get along with different breeds of dogs, children and people and lead a harmonious life in the same environment.

French Bulldogs are very intelligent and can receive basic training in a short time. However, when giving advanced obedience training to these stubborn dogs, expert help is needed to achieve positive results in a shorter time. While training, you should pay attention to your tone of voice and when you do something you don’t want, you should express it to him in a precise and not too loud tone. You can help him gain this behavior by rewarding his positive behaviors. If you use the toys that are interesting in the training of this dog breed that loves to play, you will get positive results in a shorter time.

This dog breed with a small stomach has frequent toilet needs during childhood and adulthood, and it can be a little difficult to gain toilet training. A French Bulldog in need of a toilet smells its environment and looks for a suitable environment before meeting its needs. At this stage, you should take your dog to the designated area to defecate. After meeting his needs, you should caress and reward him to tell him that he has shown a positive behavior and to make him repeat it. Because they are stubborn, you should control your tone well during the training phase and be patient.