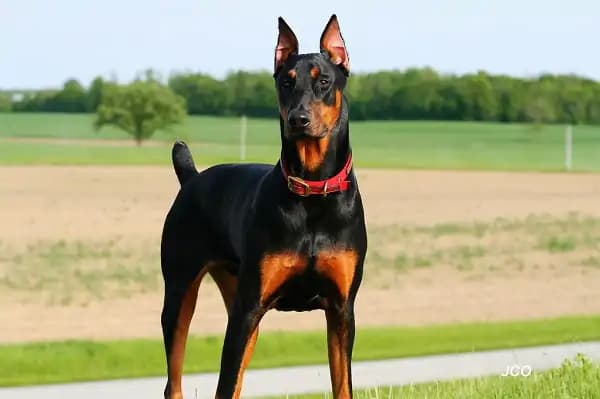 Dobermann is undoubtedly one of the first dog breeds to come to mind when it comes to guard and guard dogs. The Dobermann Pinscher, best known around the world, is in the category of guard dogs. This breed is always alert to any threat; It is known for being energetic, fearless, intelligent, loyal and obedient. It is a very popular dog and has a noble appearance with its sharp intelligence and magnificent physique.

Origin of the Dobermann Dog

Towards the end of the 19th century, a man named Louis Dobermann, a tax collector and night watchman in Germany, needed a dog to protect the money he was carrying from thieves. For this reason, he tried to crossbreed different breeds of dogs in order to obtain a special guard dog. When the size and strength of the Rottweiler, the speed of the Greyhound, and the strength of the Terrier came together, the Dobermann emerged. In the formation of this dog; Different breeds were used.

These; They are the German Pincher, German Shepherd, German Shorthaired Pointer and Weimaraner. Louis Dobermann worked for 60 years to create this dog. This breed, which first appeared in 1876, gained great popularity. This breed continued to be developed further after the death of Louis Doberman. This dog, which was brought to America at the end of World War I, became quite popular. Used in World War II, this dog is the official dog of the American Navy.

Dobermann; It is a medium sized, elegant but strong dog. Shoulder height; While it is 68-72 cm in males, it varies between 63-68 cm in females. Weights; While it is 40-45 kg in males, it is between 32-35 kg in females. The colors of this dog, which has short and bright hair, are most commonly known as black-light brown, and there are also different colors. This dog, which has a muscular body, has a long neck and medium-sized ears. Their ears can be erect or flattened, and their eye color is compatible with the color of their feathers. It has a strong jaw and a scissor bite, where the upper and lower teeth come together at a perfect angle.

The character; It is an intelligent and strong guard dog that is always on the alert, ready to protect its family and home. This highly loyal breed is considered one of the most intelligent dog breeds. He is always wary of strangers, but does not become aggressive for no reason.

Dobermann, one of the most intelligent dog breeds, is one of the dogs that can be trained very easily due to its obedience. These dogs, which learn easily and react quickly, are also bred as guard dogs with their strong, fearless and athletic structures. These dogs, which are often used as police and military dogs, are also excellent guard dogs. If not given good training as a puppy, it will turn into an aggressive, destructive and unmanageable dog.

They should be socialized from a young age in order not to have problems with children and other animals. They should have a strong and guiding owner in their education, and they should learn who the boss is. Also, they need regular exercise and movement, so they are definitely not a suitable dog for the quiet or first time dog owner.

It is not right for them to be fed at home without exercise as they need a long walk or jog daily. It is a fact that dog owners are lucky in terms of care. This breed requires very little maintenance. Hereditary; may experience certain health problems such as heart, blood clots, liver and cancer problems. In addition, the average lifespan of this breed, which does not like cold weather, is 10-12 years.